Before I’ll start describing my adventure with firefox on gentoo, I’ll clarify that firefox is the only browser that I am using on my computers (well links/elinks/w3m for text browsing) and hopefully nothing is going to change my mind. Why so?

For the past couple of years I have tried a bunch of alternatives and still believe that firefox is the best choice. When chrome(ium) became popular, a lot of people switched to the glorious product of google, and it seems to me that the only reason for that switch was a very good job of google’s marketing department. I found it quite cheeky when they started the overall development, as firefox was really the best on the market at that time, it was free, and it was way more popular than anything else, that was probably something that google couldn’t tolerate. I always ask myself, wouldn’t it be more productive, to join the forces and to work on one product? But then I kind of realise that if it would happen we would really end up with monopoly in the world of browsers, which we don’t want.

So, my main dissatisfaction with chromium and any webkit-based browser is that they cannot fix freaking selection. I can’t show the picture, as I don’t have it installed, but whenever you select a text on a page with a complex layout, selection goes faaaar beyond the text and selects some random areas of the web-page. You guys might say that I am picky, but this selection thing really drives me nuts. Can anyone fix it?

Another thing that nobody can mimic is Vimperator. Yeah, there are some plugins in chrome, but they are just funny. Vimperator is not about adding h,j,k shortcuts, seriously. Look at the code if you don’t believe me.

Finally, to my impression firefox is the best balance between speed and resources. Probably chrome can do regexps faster, but on my system it eats noticeably more memory which means that if you have more that one tab open then most of the regexp effort goes down the drain because of memory overheads. It is not really a scientific fact – just my personal intuition. May be you can configure this stuff, but after I used all my patience, firefox is still the winner.

Any browser is a critical application, which should work fast and shouldn’t fail. That is why I am and will compile all my browsers from source with the highest possible optimisations. After one of recompilations I found out that sometimes the fonts were rendered bold in the places where they shouldn’t be. Mainly it happened when you scroll up and down with a wheel of your mouse. See the picture below. 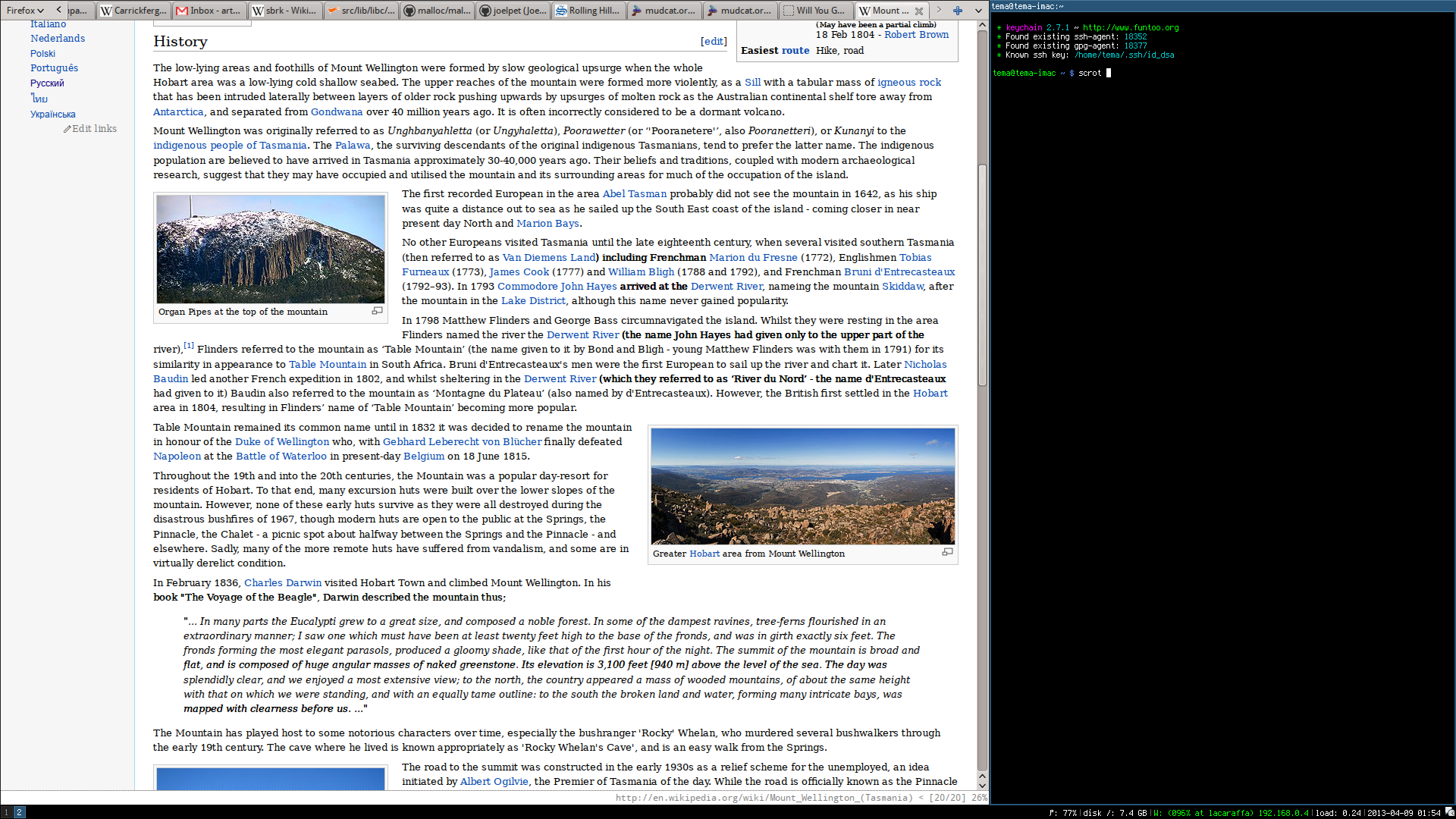 A couple of phrases in the middle of the wikipedia page look like if they are bold. In the beginning I though that it is a problem of fontconfig and infinality which I was actively configuring at that time. Later I found out that it was a problem in firefox itself. The thing happens not very often and if you select and deselect this bold text, the boldness goes away. So in principle you could even live with this thing, it is just quite annoying.

After some googling I found a bug in the firefox bugzilla marked as fixed. Well, it definitely wasn’t fixed on my system, and I am using the latest releases. Then I started to read the patches and investigate what the hell is going on. It turned out, that the problem had something to do with the bug in cairo, and firefox people have their own version of cairo, where they happily committed the fix. So far so good, but gentoo is linking against system cairo which does not have these changes.

Anyhow, after some more investigation I found a flag which links against cairo from the firefox repository. The flag is called --disable-system-cairo :) So all you need to do is to add the following line to the e-build: